ARC Review: Breaching of the Barrier 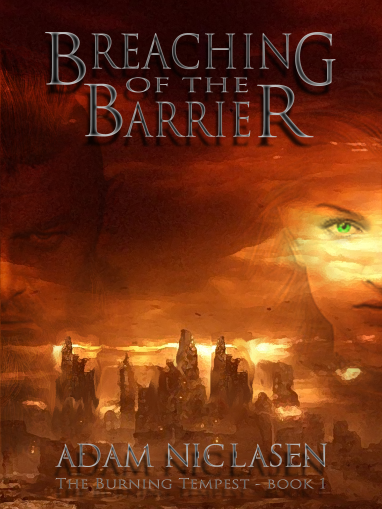 I received this book in return for an honest review.

This book is not yet available for purchase but I will post about it again when it nears its release date.
The synopsis I have written is very basic.  I have not read one from the author and I did not want to give away any spoilers.

Synopsis
Humanity has created a barrier around the Narak, a force that threatens their very existence, but how long will it last?  Follow the lives of multiple characters as they fight for survival and power in a post-apocalyptic world.  Forgotten knowledge and technology has been replaced with magic, and the strength of the enemy inside the Narak is overwhelming.

Characters
There are a lot of characters in this book but each one is unique and carefully thought through.  They are well designed and remain consistent, having their own personal flaws to keep them realistic.  Some of the characters go through major changes during the plot, and their pain, emotions and challenges are clear and convincing.

My favourite character was Arrt and I thoroughly enjoyed every moment he was involved.  You will have to read the book to find out why.  Other than him, I have difficulty picking out another from the crowd, but I believe this is a good thing.  The characters were diverse and interesting, each one being just as good as the next.  A lot of work was also put into character accents.

The only character I am unsure about is Rikard.  His introductory chapter gave me an impression of his character that later seemed inconsistent.  It is possible this change could have occurred due to the conditions, but this was not clear to me.

Plot
This book is intense.  There is a lot of very descriptive fighting, with horrendous injuries and many characters do not make it to the end.  That being said, the battles complemented the story.  They were never there just for the sake of having another action scene.  I find this factor very important and I think it was done well.

The storyline itself is complex and often leaves you guessing.  I love it when the outcome is not predictable.  I found it a little difficult to keep up in the beginning but, once I became used to the world, the rest was much more enjoyable and I was eager to find out more.

There are multiple storylines to follow from different points of view.  I liked being able to witness what was happening in the eyes of opposing sides, but it was still written in the way that did not give away too much information.

World
The book is set in a post-apocalyptic world where science and technology had advanced much further than the current day, but much of that information was lost over the centuries that followed.  A magic element helped the people to overcome this loss, and it was another well designed aspect of this book.

The magic is separated into elements and a lot of thought has been put into the depth of each one.  I found the different types of magic users interesting, and the way the elements connected with other parts of the book was very clever.

One of the things that I had difficulty with in the beginning, but later became used to, was the use of language.  There are a lot of different names for people, magic and creatures and some of the names change depending on which point of view you are reading from.  This was no longer an issue once I became really involved with the book.  There is also a glossary at the back for reference, though I had not realised until I had finished.

Writing
This book is written with clear detail and structured sentences.  It has the type of writing that makes me want to improve my own work.  I came across very few errors, and even these were minor.  I think this is an incredible achievement, especially considering this is the author’s first book.

This has to be one of my favourite books that I have read all year.  The depth and detail to the story is incredible and it is clear how much work the author has put into each aspect.

I would recommend this book to Sci-Fi and Fantasy lovers, but I would also encourage anyone else who is willing to give it a shot.  You will not be disappointed.

What do you think about this book based on my review?  Will you read it when it becomes available?